Gregory Peck, Lee Remick and David Warner together in a film is ace, but I don't think The Omen (1976) holds up terribly well. Maybe it's that I had a hard time buying Lee Remick, looking every bit 20 years Peck's junior--and then some--, as his wife. The special effects are, to our modern eyes, fairly dated as well. The film's score, however, really sells the horror and suspense of the story. Discordant instrumentation does more to set me on edge than a barking Rottweiler any day. For the uninitiated, Peck's character is tasked with killing Damien, the Satan-spawn masquerading as his young son. If he does not, then that will spell the end of mankind.

I'm just watching the tail-end of the film now. It's Peck against the kooky nanny who was sent by Satan to protect the boy. It ends badly for her. -lots of over-the-top deaths in the film, to be honest, and hers is no different. I recall there being more than one Omen sequel, so I probably needn't have to tell you if 'good' prevails over evil' here.

I have not been to the hair dresser in nearly two years and it shows. I had feathered hair when I was a young teen. My feathers always drooped in the abundant coastal fog. Because of my sad-looking locks, some bratty kid/s decided to reward me with an unfortunate nickname: Lassie.

Gregory Peck, Lee Remick and David Warner together in a film is ace, but I don't think The Omen (1976) holds up terribly well. Maybe it&... 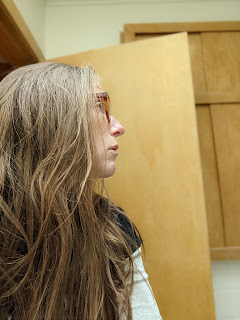