My mother's landlord is playing 'hard to get'. He's not yet signed for the post sent via registered mail. She's poised to send a second letter via the same route. However, if he simply refuses to sign for the post yet again, then I need to be ready to plot next steps. I have a lawyer pal whose services might come in handy should the retrieval of the security deposit continue to prove elusive.

When I was a little girl, my friends and I used to 'play Grease'. This meant that who ever owned the soundtrack to the film Grease had friends over for an album sing-along. This also meant that she who possessed the record got to sing all of Sandy's parts. The subject was not up for debate, ever. I did not own the record, so I was usually Danny. :S

I know Olivia Newton-John is one of Australia's biggest exports and beloved back home, but she was very much loved on these shores as well. I mean, heck, I even liked Xanadu; Newton-John was a delight in that film.

We're cleaning windows, inside and out, and pressure-washing the exterior of a property comprised of multiple buildings of a long-term client down on the Peninsula this week. I don't think we've been in the house, actually, since the kick-off of lock-down back in 2020. The client's husband is usually not home when we're there. Although I've not seen the client's  husband in real life, I have had the--ahem--pleasure of seeing his collection of photos showing him with various heads of state and lesser US government officials. His penchant for the powerful is not very discerning, and I was wondering if I'd still see his snap with Putin at the helm of the photo collection. And wouldn't you know it? I did!

This lovely review made my day: My gutters were totally filthy; probably hadn't been cleaned for years. The team stayed until my gutter... 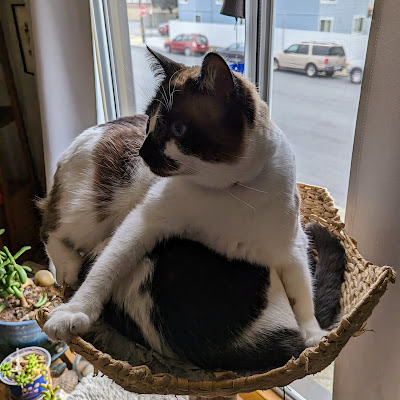