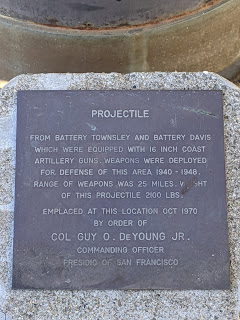 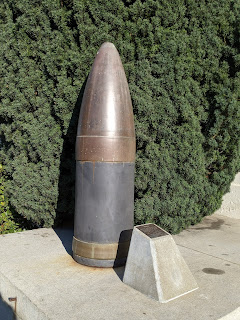 A mighty big bullet!
Look, I'm just going to admit that my vocabulary isn't as expansive as it could be, but I do chuck out ten dollar words now and again. However, I have never before heard the verb 'emplace'. When reading the plaque, I couldn't help but smile as 'emplace' reminded me of E.C.'s verb for enlarge 'embiggen'. :D

When something is 'emplaced' it has been put into position. Ex.: Missiles were emplaced around the city. A statue was emplaced in the park.

My Mom is a post-war baby, but my Dad was a little boy when these weapons were 'locked and loaded'. It's a trip to think that this city had massive projectiles facing out toward the Pacific, ready to meet our foes 25 miles offshore should the need have arisen. Fortunately, it didn't.

I drove into SOMA the other day to shop for shoe inserts for a new pair of boots purchased. The store I visited looked like what is shown in the photo below when I drove up. I wasn't sure the place was still in business until I saw a small 'we're open' sign tacked onto the front of the building. I asked the employee who rung up my purchase if the boards were put up in anticipation of possible Election Day shenanigans. He said that the boards were first put up back in March at the beginning of lock-down and that they've simply been left up for the duration. I suppose they could have come in handy had things kicked off here between pro-Biden and anti-democratic forces. However, as far as I know, the only thing that happened here on election night were peaceful revelers congregating in the Castro and Mission Districts. Hopefully, everyone was smart enough to be masked. 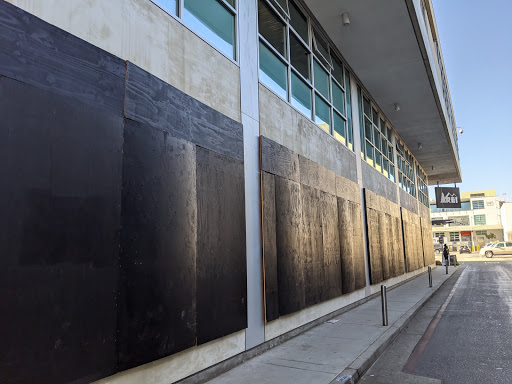 A mighty big bullet! Look, I'm just going to admit that my vocabulary isn't as expansive as it could be, but I do chuck out ten doll...