A wooden statue of Mrs. Trump was torched in Slovenia. To be honest, I don't think the charring could have made the statue much uglier than it already was. The snap above shows Mrs. Trump in all her wooden glory sometime after she was erected. I think the creator of the piece used a chainsaw. It almost looks as if a Spanish furniture restorer had gotten his hands on her before the unveiling as well.

I've made a few more 'quarantine Kisten'. Now I need to figure out who needs a somewhat useless 'beshelled' box in their life. 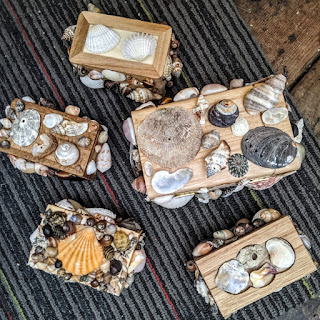 This is the first time in many years that SF isn't filled with festivities and packed with people for Pride weekend. After our bike ride through the Golden Gate Park today, I was sitting with my husband in a neighborhood green-space along Haight St. when a man wearing a rainbow-colored mask and backpack walked by and I ask aloud: Is this Pride weekend? Normally, one would never need to ask.

Although many businesses are either still closed or only open for partial service, I am seeing an increased presence of folk out and about. Our bike ride through the park today was met with slightly more motorists than last week's ride. I noticed quite a few picnic-goers. We're still not seeing the normal number of park visitors for June, as its museums are still shut, but Golden Gate Park is definitely filling up as the days of quarantine wear on. The mask-order is still in place in California, but I think I'm seeing less folk adhering to it now than before. Are we having collective mask-fatigue? Probably.

All of my beach-combing over the past few months has paid off. With some wee sea bits collected, I've 'beshelled' the heck out of a cheapie, wooden Kiste I picked up at a craft store the other day. I think, all in all, the 'beshelling' took nearly two hours to complete. I really enjoyed the process of deciding how to place the shells. The set-up was me roughly fitting all the bits together on each side of the box, snapping a photo of it for reference purposes, then removing said shells before gluing them on, one at a time. The whole process felt very meditative.

Here are snaps of the Kiste below plus another goodie-- 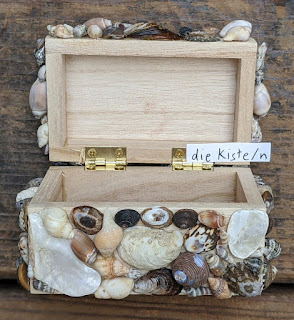 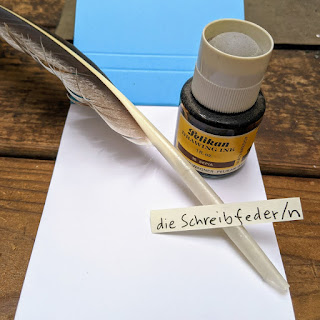 I made a card.


Last week, I did something virtually unheard of in 2020. However, thanks (?) to the Covid crisis, I was able to drive my car midday on the freeway downtown in order to park in front of a stationer's just off a normally very crowded Market Street. Usually, I'd take public transport for such a trip, but, even with the current precautions in place, I'm still somewhat nervous to do so. The particular shop I visited sells card stock suited for printer use & I wanted to make cards out of some old San Francisco mental maps.  Mental maps, for the uninitiated, show how one engages with or conceives of a specific geographical area. I recall learning about mental maps in a class on German culture some twenty years ago. We non-German students were asked to draw a mental map of Germany. Most of our maps showed a very Bavaria-centric country replete with images of beer mugs and pretzels. Our teacher, however, a woman who was part of Germany's counter-cultural generation, the 68ers, drew a map of a divided Germany with a focus on the Wall and Checkpoint Charlie.

With the help of my computer-savvy husband, I was able to reduce the map image via an app. called GIMP. I am fairly pleased with the 3" x 5" result and have already sent out a few cards to friends.

I don't want a biscuit for this, but I've known about Juneteenth for near on 30 years. I also know how the Black People's Happy Birthday goes...well, mostly. Big whoop. I live in the multi-ethnic California Bay Area. It's like congratulating me on knowing a bit of Spanish. If you grew up in California, then you're going to learn some Spanish vocabulary. You may even manage to be able to put together questions and statements en español también. It's just part of the experience of living here.

But back to Juneteenth--

Apparently, the man in the White House thinks that he made Juneteenth 'very famous'. You see, his team had originally planned one of Trump's alt-right rallies, I mean, re-election campaign dos for June 19th, the day when Black folk celebrate Juneteenth. Public outcry forced his camp to then postpone the rally by one day. Trump also went on to claim that 'nobody had ever heard of' the holiday which actually just means that he had never heard of it. I don't know if 'The Donald' could be any more of a rube.

Since sustaining a foot injury nearly two years ago, I have not be able to jog. I am, however, able to run for the bus & hustle across a crosswalk when needed. Last week, I asked my PT about how I could 'train' for getting back into running, he suggested alternating between 3 minutes of fast-paced walking and 2 minutes of slow-paced walking for a duration of 15 minutes (or longer, if my body permits). The other day I set out for my usual hometown beach trip. I purposely parked about a quarter of a mile from the beach in order to practice the 3 min. fast/2 min. slow walking pattern. After about ten minutes, my big toe joint started to ache. Fortunately, there was a bench nearby, so I took a seat in order to wait out the discomfort.

The bench I chose to sit on is one in a series installed along a footpath at the edge of the beach. I'd never sat at one of the benches before because, frankly, the beach is just a stone's throw away and I'd rather sit there. As I sat, I turned to read the names of those commemorated in a plaque set into the backrest. I experienced an uneasy feeling of deja-vu for I knew the names. A dear, high school friend of mine and her husband had been killed in a car accident in the mid-1990s and it was they who were being commemorated. I sat taking in the view and thought of my high school friend until my toe felt better, then scooted off down the beach.

View from the bench--- 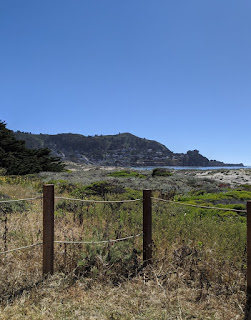 Here are also some beach finds for your viewing pleasure-- 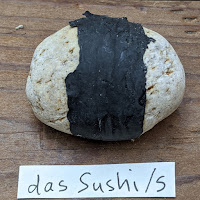 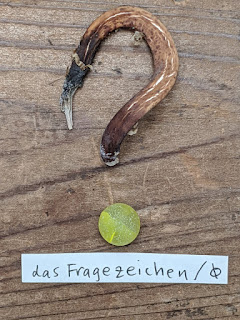 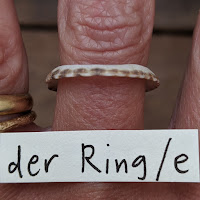 
There isn't much fun stuff to talk about of late, so here are a few funky beach finds for your viewing pleasure--

We took the bikes out for a spin yesterday in Golden Gate Park. It was a lovely day with blue skies overhead and mild temperatures. A stretch of roadway in the park has been blocked off to through traffic during quarantine so that park-goers may be able to exercise in socially-distant fashion. My husband and I began our journey at the bottom of the park, hit the car-free zone somewhere in the middle of things, then looped back down past the car and out to the Great Highway (a road that runs parallel to the ocean also closed to car traffic for the duration) for a quick back and forth. The bike trip was scenic, only slightly taxing and stress-free. Prior to yesterday, I hadn't been outside of the house on my bike in a few years. I look forward to some more 'quarantine cycling' before the roads again become clogged with cars as businesses begin to reopen in the ensuing weeks.

I leave you with some new German vocabulary-- (I have added the translations.)

Melania Trump in wood. A wooden statue of Mrs. Trump was torched in Slovenia. To be honest, I don't think the charring could have m... 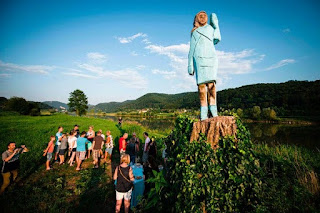